The Friends of Nant Fawr form part of  the Cardiff Biodiversity Partnership. This is a group of people of people who represent organisations interested in Biodiversity. They have developed a local biodiversity action plan (LBAP) which emphasises the need to conserve and enhance the biodiversity of Cardiff.  Action plans from the groups involved are recorded on a UK-wide system called BARS  i.e. the Biodiversity Action Reporting system.

We have started logging the activities carried out by the Friends under three sections :
The species action plans - all actions to secure species conservation and re-establishing species native to habitats.
The habitat action plans - all management procedures to maintain and improve habitats
Raising public awareness  -  to get more people involved in the projects, and to appreciate the local resources
So far we have contributed 15 “actions” which can be viewed by all interested parties from all over the U.K!

Presently, the main focus in Wales is the action on pollinators ,and much of the work depends on establishing baseline data about the flora and fauna within our local environment. Much of the data required for this, as well as other projects, will need to be gathered and recorded by groups such as the Friends of Nant Fawr and we have determined to follow this through between June and September 2014 (follow our progress on this website!)

Grow Wild is a four-year campaign to bring people together to sow UK native wild flowers. It has been funded by Big Lottery Fund and is led by the Royal Botanic Gardens, Kew. BBC One's Countryfile programme is working with Grow Wild and they have produced 230,000 free packs of native wild flower seeds

We applied for some packs and we were fortunate to receive 16 boxes, each containing 5 packets of seeds native specifically to Wales (as well as a "build yourself" bee house!). We have distributed 2 boxes to each of the five schools that we have been working with and their Ecogroups will use these in their school grounds. 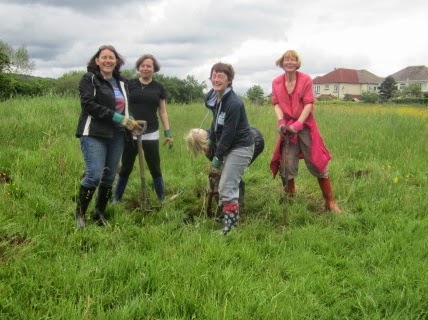