Why "The Friends of Nant Fawr"?

The Friends of Nant Fawr were formed in 1994 as a conservation group of interested local residents with the aim of protecting an area of natural woodland and meadows stretching from Roath Park to the top of the Lisvane Reservoir.   This was the third conservation group to be set up in Cardiff under the guidance of the Cardiff Council.

What are the Nant Fawr Community Woodlands?

The Nant Fawr Community Woodlands and Meadows form an important part of the green corridor along the Nant Fawr stream, connecting the centre of Cardiff with the countryside to the North of the City. The land is owned by Cardiff County Council, and managed by 'The Friends of Nant Fawr',  The Council Ranger organises practical workdays each month, performing tasks such as path laying, stream clearing, and coppicing. Other events include natural history rambles, and talks on related topics.


The North-eastern section of the site consists of three ancient meadows which once formed a part of Rhyd-y-blewyn farm. Each of these meadows has different ecological characteristics, and different communities of plants and wild-flowers. In the early years of the group, these meadows were managed in a traditional way by allowing the wild flowers to bloom and seed before cutting and removing the hay in August. This removal is important as it reduces the nutrient content of the soil and encourages the growth of wild flowers rather than grass. Consequently the flower populations are increasing, as well as the numbers of insects such as butterflies that feed on them. Unfortunately, it has not been possible to arrange for the hay to be cut in recent years.  This is an issue which further requires consideration


We are a small Committee of about a dozen  members including the usual officers. We meet approximately 6 times a year, unless there is something extra to discuss or plan.  Some of our members have been with us for many years and we always welcome their experience and advice.
However, we are always interested to recruit new members to the Committee, particularly those with special skills. Please contact us if you are interested in joining us. 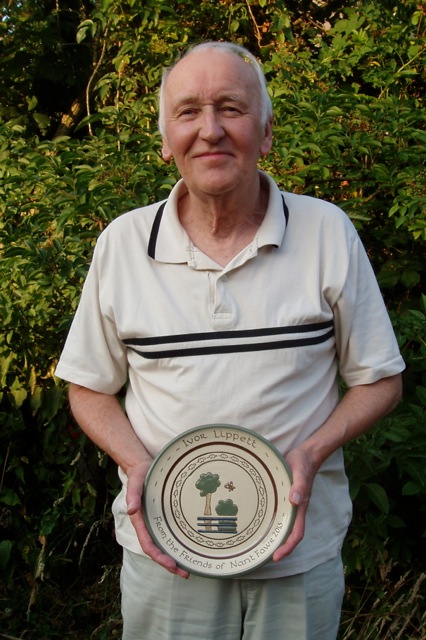 Congratulations to Ivor Lippett, who was awarded a British Empire Medal for services to the community.  In addition, Ivor was awarded a commemorative plate by the Friends of Nant Fawr in appreciation of the work which he had done over the last eighteen years to support the Friends.  We are all glad that Ivor has regained his good health and hope to see him at our workdays for many years to come.