The next workday is 10am on 22 January, meeting at the Reservoir Car Park, off Rhydepenau Road

There are woodland spring bulbs to plant in Rhydypenau Wood, and if weather allows, some yellow rattle seed to sow in the grassland areas.  For those that that would like some more physically demanding tasks there are drainage channels to re dig to keep the water off the paths and trimming around the orchard trees in readiness for the spring growth. 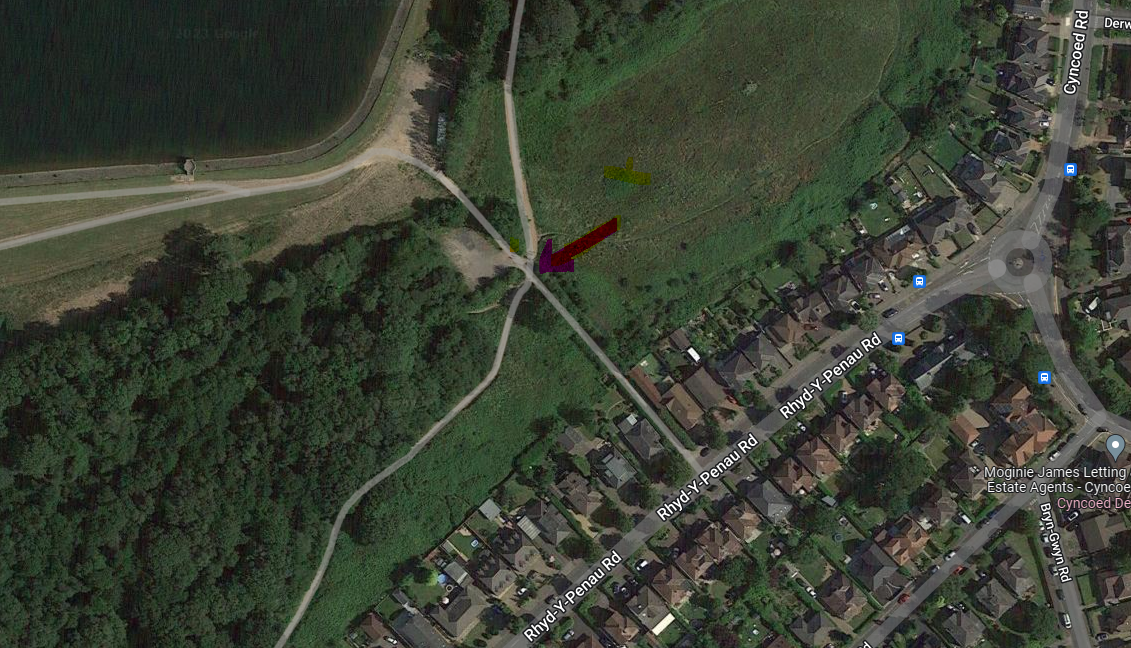 The next workday is 10am on 27 November, meeting at Heol Esgyn Bridge

We will be continuing with the dismantling of the bike ramps and sycamore control in Woods Covert, along with planting some new saplings in the woodland. 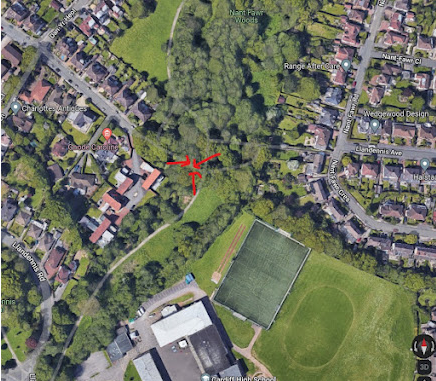 Guided walk - The History and Folklore of Trees, 6 November 2022

Our Council Ranger, Kevin Date, will be leading a gentle stroll through Woods Covert to discover some interesting and strange histories of  native trees on Sunday 6th November,  2.00 -3.00pm.

The distance of the walk is 2km. It is a free walk and no booking is required.

The next workday is 10am on 30 October, meeting at Heol Esgyn Bridge

Sam will be there to coordinate the Dormouse Survey/installation of the tunnels. Kevin will work with other volunteers who would prefer a more practical task which will include removal of the bike ramps, sycamore control and re digging of the drainage ditches in preparation for the winter rains.
Given the amount of work in Woods Covert I think we can continue next month with the saplings and bicycle ramps as well. Given that the saplings have been grown on in pots I don't think they will need staking.

All events can be seen in the calendar, which can be subscribed to. 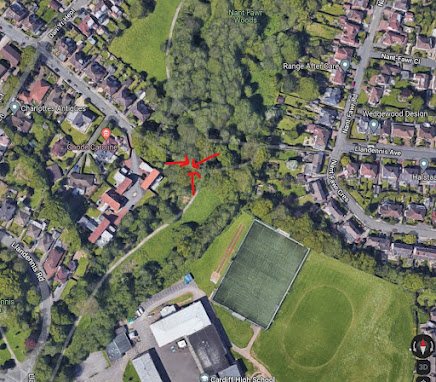 The next workday is 10am on 28 August, meeting at Heol Esgyn Bridge

This will be a hey rake and for the first time since covid there will be refreshments - Welsh cakes and cider!

All events can be seen in the calendar, which can be subscribed to.

There was a good turnout for our June Workday on Sunday with 16 volunteers taking part.

Some people were cutting back vegetation whilst others helped Kevin to dig out a shallow pond in the Boggy Meadow. Hopefully this will be a haven for invertebrates, amphibians and birds. 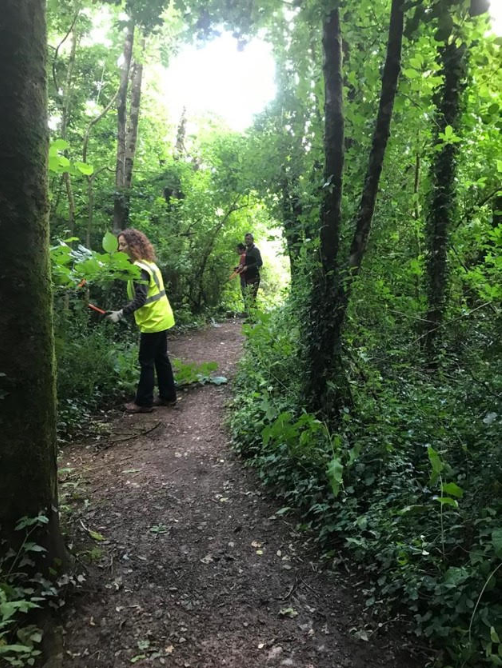 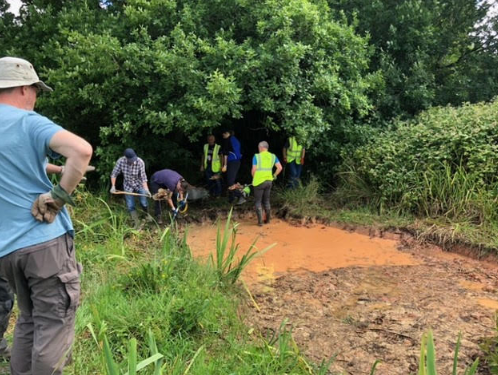 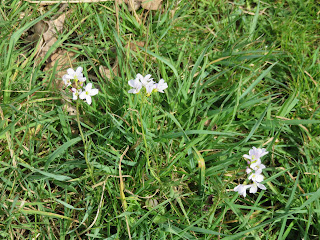 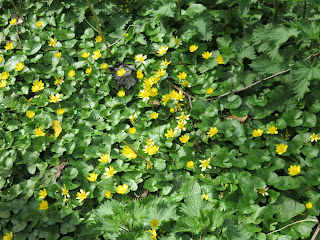 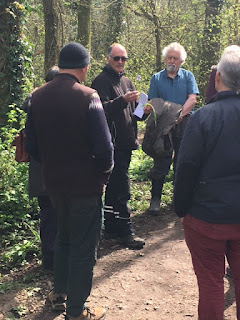 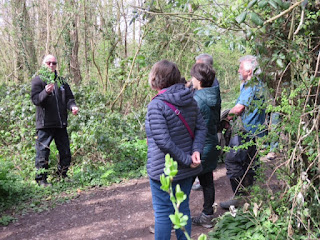 On the sunny, spring-like afternoon of 10th April, 17 people joined Ranger Kevin Date for a walk through the Cardiff High School Meadow and Woods Covert to learn about the spring flowers found in this area.  Over the next hour and a half the group not only learnt how to identify the various species but also learnt more about their ancient medicinal uses and histories.

Starting in the wet meadow, alongside the High School, the first flowers seen were bright yellow clumps of Marsh Marigold.  This member of the Buttercup family is one of our ancient plants that has probably survived in Britain since the end of the last Ice Age, about 10,000 years ago. Like many of our flowers it has a number of common names, including Kingcup.  Kevin pointed out that this was an insect pollinated plant and the rich nectarines were an important food source for insects early in the year.  Close by we came upon the pale pinky-white/mauve flowers of Cuckooflower or Lady’s Smock, a relative of the cabbages and another flower with many common names.  It is also the food plant of the caterpillars of the Orange-tip butterfly, an early spring species that will be on the wing any day.

The bright yellow flowers of Lesser Celendine were everywhere along the hedges in the meadow and in the woodlands.  This is the earliest flowering member of the Buttercup family.  Kevin explained that in the past, when many plants were used for medicinal purposes, apothecaries used the shape of parts of plants to decide which complaint they could be used to treat.  This was called the Doctrine of Signatures.  Kevin explained that Lesser Celendine, also known as Pilewort, was used to treat haemarrhoids because the rounded blobs on its rooting system looked like piles!

Entering Woods Covert we found two of our common hedgerow and woodland shrubs; Blackthorn and Hawthorn.  These are both thorny members of the Rose family and Kevin explained the easiest way to tell them apart was to remember that with Blackthorn the flowers come out before the leaves – as we could see from those round about us – while with Hawthorn the leaves come before the flowers. Blackthorn flowers in March/April while the main flowering period for Hawthorn is May, which is where it gets its other name of May-tree from.  Sloes, the fruit of the Blackthorn, have been used to make Sloe gin for centuries but Kevin said that it was important to not pick the sloes until after he first frost that softens the skins.

Further into the wood we came across the leafy growth of two members of the Carrot family; Hedge Parsley and Hemlock.  Although not in flower yet Kevin explained how to tell the two apart from their leaf shape, an important identification aid as although their leafy stems both look rather like celery Hemlock, and its close relative Hemlock Water-dropwort (which is also found in Nant Fawr), are both highly poisonous.  We also learnt how wild carrots had been bred to be orange in colour to celebrate the reign of William of Orange!

The woodland floor contained carpets of white flowers, mainly Ramsons and Wood Anemone.  The leaves of Ramsons (also known as Wild Garlic) are used as a garlic alternative and when crushed release a strong garlic smell.  Wood Anemone is one of our ancient woodland plants.  Its delicate white flowers sway in the slightest breeze giving it its alternative name of Windflower.  It is a wind pollinated plant so has no rich nectaries to attract insects. Kevin explained that in Britain it rarely produces fertile seed so spreads by runners, but at a snail’s pace of about 6 feet every hundred years.  Thus, by measuring the circumference of clumps of the flowers you can gauge the age of the woodland.  Near the top of the wood Kevin spotted some Garlic Mustard or Jack-by-the –hedge, just coming into flower.  This is another member of the Cabbage family with a mild garlic smell, and can be used as a salad plant.  Itis also a food plant of the Large and Small White butterflies.

Kevin also pointed out two very common plants; the Daisy and Nettle.  He explained that each ray in a daisy flower was an individual flower so that the actual flower is a composite of many individual flowers.  He also explained that the flowers close up for the night, which is where its name originated from – Day’s eye.  Lastly he took us all by surprise by picking up a piece of nettle stem without flinching from the stings, which is apparently because Rangers become immune to them over time!  He explained that if pick early in the year the soft leaves can be used in salads while the plant itself used to be used to make a green dye.

It was surprising how quickly the hour and a half went and how much Kevin had been able to cram into that amount of time.  We thanked him effusively for the walk and look forward to his next one 6th November. 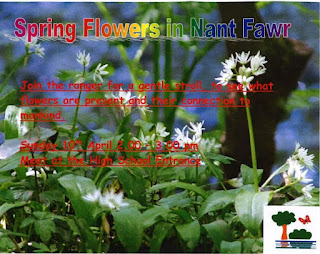